There has been no hedgehog activity now since the last week in October and I am feeling bereft. They have usually been active until well into December, so I am desperately hoping that nothing bad has happened to them. I am clinging to the theory that one of their many talents is for predicting a severe winter and they all decided to retire to their beds early…only time will tell.

Once again the ornamental hedgehogs have been busy multiplying and partying over the Christmas holidays, especially the ones in the garden and I now have a lovely set of hedgehog shaped coasters to add to my ever increasing collection. 🙂 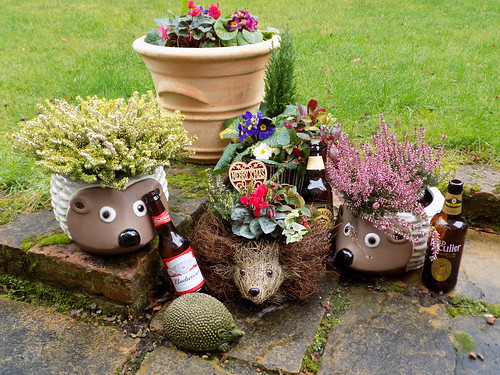 Despite there being no sign of any prickles – not even in the log pile or the two hog houses – the garden remains a hive of activity all the same. Wood mouse HQ is still under siege day and night from a neighbour’s cat. Just as well then that the main entrance is located right beneath a bird feeder so that any stray nuts and seeds land right outside their front door and they don’t have to stray too far. Even so, I have felt the need on occasion to sprinkle a few extra sunflower hearts at the entrance and have even bolstered their defences in the form of an old upturned hanging basket to prevent the crafty feline from constantly trying to dig its way in.

Sven, the Swedish blackbird finally emerged with his new set of feathers and still insists on his daily bath despite the freezing temperatures. Most mornings during the recent Arctic weather, he has been hanging around on the doorstep for a handful of mealworms and to remind me to un-freeze the bath water. One chilly morning, I couldn’t understand why he seemed particularly stressed – not the only one over the festive period! – until I discovered that his bathing water had been reduced to half an inch of solid ice. No sooner had it been topped up and defrosted he was in their like a shot and spent the next ten minutes having a good old splash around…Brghhhhhh!

Evenings are now particularly noisy after an influx of his Scandanavian cousins – searching for warmer weather!!! – all squabble for the most desirable perch to spend the night ahead. With Sven’s love of water and all things hedgehog, I did wonder if he was going through some kind of identity crisis and now fancied himself as a fish, but upon closer inspection the bird in the photo looks to be one of his northern cousins! 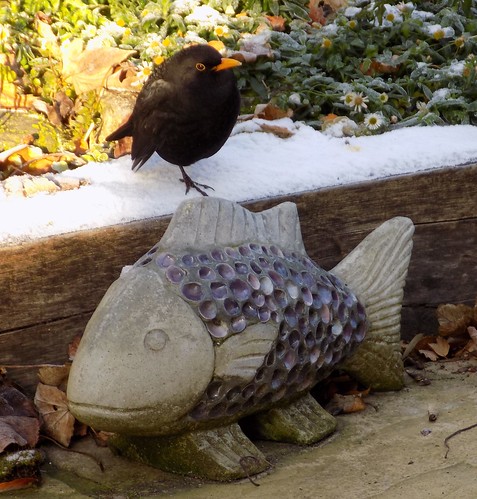