Yes, the formidable Brenda is back and woe betide anything that comes between her and the food bowl! Unfortunately, she has returned just as everything around has turned to snow and ice. She was caught on camera several times last night trying to drink from the frozen water bowl and returned once again just before dawn to check if it had thawed out. Fortunately, she was captured guzzling earlier in the evening before it froze, so at least she didn’t go too thirsty. I have now put a water bowl in the feeding station, so hopefully that will stop it from freezing. 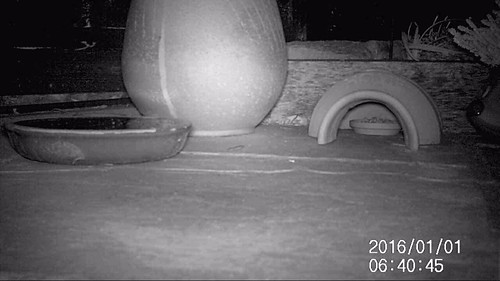 The wood mice don’t seem to mind the cold and are making the most of the fact that the felines would rather be curled up in front of a cosy fire.
Unfortunately, we still have at least one sparrow hawk in residence and it appears that Sven may have become the ‘dish of the day’! Only the other week, he had a very lucky escape as one swooped in silently, just skimming the garage roof, missing him by millimetres. Having seen them in action, it amazes me how any of their targets manage to escape. On a brighter note, he has been replaced by another, equally charming and characterful male blackbird who also loves to bathe in these icy conditions and is just as brazen. Eric, who I would imagine is one of Sven’s offspring, will stand just inches away whilst I top up the rations…a lovely way to start the day.