It turned out that the hog covered in graffiti was none other than our new resident Monty – or should I now call him stripe! He didn’t stick around for long, he was captured on camera in and out of the hog house constantly scratching, I suppose it could have been down to the warm weather or lodgers of his own, but the excessive scratching only started after he had been given a makeover. Young Nagini certainly wasn’t impressed with his new paint job either, it didn’t take her long to give him the cold shoulder, although wandering off for refreshments twice during his circling routine, certainly didn’t do him any favours! He turned up again a couple of nights ago and also the one with the cross on his back, which I hadn’t seen for a while, whatever the paint is, it doesn’t seem to be fading much.

Nic, I’ll send the photo to Fay and see what others I can find, interestingly enough the paint doesn’t show up as well on the Bushnell as it does on the Aldi camera.

I’ve put together a few clips of a restless Monty upon returning from a night out. He was scratching for a full one and half hours before he finally settled down! 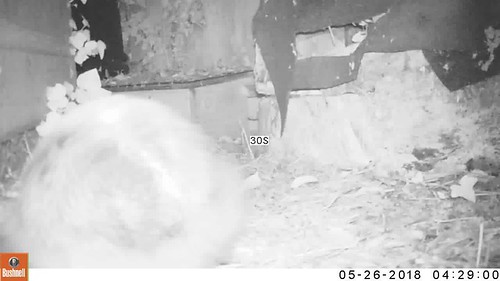