Such a shame that the one chance you got to photograph a hog in daylight was ruined by all the excessive paint. Whilst going back through all the camera footage, I noticed another one that had been marked with one stripe, so does that mean that the next one that I find scrawled all over will have three stripes and the next four and so on, until they are completely covered! Can you just imagine the crew of Springwatch or Planet Earth hoping to record some hedgehog footage, only for them to finally arrive covered in paint!

Like you say, some hogs just stand out and are easy to identify, but there are many subtle ways to identify them if you put the effort in. Apart from colouring, the shape of the face and nose differ. Some have very pointed noses, some more rounded and some have Roman noses and the males will very often have the odd battle scar. Then there’s body shape, just like humans they are all different. Some have rounded bodies and some are more torpedo shaped with long legs. There’s even temperament, we have one at the moment that’s a bit manic, he always acts as though he’s on the run from somebody or something!

To obtain the best view of them, place the camera about three inches off the ground, a brick is ideal and then you will have a hogs eye view.

This rare daylight footage was captured this morning, of a male on his way home and is probably the best that the cameras have ever recorded…so pleased that he wasn’t covered in paint! 🙂 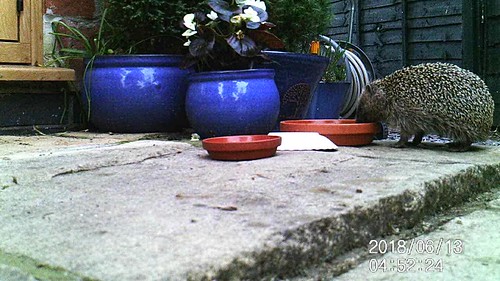