History of the hedgehog

The history of hedgehogs is long and colourful. Hedgehogs are small, spiny mammals that first evolved about 15 million years ago.

There are 17 species in five genera of hedgehogs worldwide:  Erinaceus, Paraechinus, Mesechinus, Atelerix and Hemiechinus.

They live across Europe, the Middle East, Africa and Central Asia. Hedgehogs were introduced to New Zealand from England, and now they are abundant throughout the country, but considered a threat to native wildlife.

There are about one million West European hedgehogs living in the UK.

The most common pet hedgehog is the African pygmy hedgehog, made famous by many You Tube videos and recognisable by its white fur. 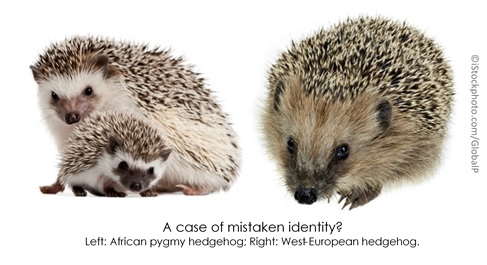 Hedgehogs have also been a big part of British culture for centuries, with mentions in classic literature and folklore tales.

History of hedgehogs in literature Lewis Carroll also included hedgehogs in his 1865 novel Alice’s Adventures in Wonderland. The Red Queen uses hedgehogs as balls in her croquet match.

Some travelling communities have traditional recipes for roasting hedgehogs.

They rolled the hogs in clay and baked them in a fire. When the clay was cracked off after cooking, the spines and hair would also be removed.

Experimental chef John Farley offered advice on how to prepare hedgehogs with almonds in his 1783 cookbook, The London Art of Cookery.

People once thought that hedgehogs sucked milk from cows. It is unlikely that a hedgehog could manage this, although they could lap up leaking liquid from a full udder.

Milk also makes hedgehogs ill as they are lactose intolerant, so it is important to only ever leave them water to drink.

Carrying fruit on their spines

During medieval times, people all over the world believed hedgehogs could carry fruit on their spines.

But, hedgehogs usually walk along with their spines flattened, and they would struggle to impale any fruit on themselves. So this myth is almost certainly untrue.

It has been suggested that hedgehogs are immune to snake bites. Research shows hedgehogs have a partial resistance to snake venom. But, a bite to the face or leg would still make a hedgehog very ill, and could even kill it.

The only venomous snake in Britain is the adder, which is incapable of biting a hedgehog through its spines.

Find out more about how you can help hedgehogs to thrive.