I hope your young male hog sticks around; he would be a fool not to. I’m amazed that he hasn’t hibernated; he must be a very hardy hog! Brenda was back last night, none the worse for her lack of liquid refreshment the night before and the water in the feeding station only partly froze. Her toilet etiquette and table manners still haven’t improved any, but I have to say, I have never been so pleased to clean up the black stuff (especially when it’s frozen!) after not having them around for so long.

Yes, it’s sad about Sven, but Eric is more than making up for his absence. He too was demanding that I un-freeze the bird bath this morning, I just hope that he can stay out of harm’s way, we had a pair of sparrow hawks stalking the songbirds last summer. I can understand why Chris Packham has such a fascination with them, they are incredible hunters, I just wish that they would leave the birds in our garden alone. I fished out this old photograph that was taken back in 2003 (sorry about the poor quality) of a sparrow hawk on the doorstep peering in…Rather sinister don’t you think? 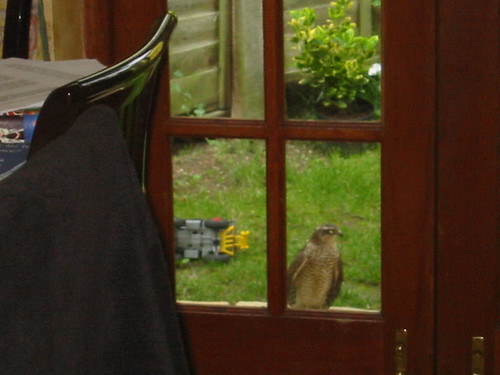 Sorry to hear that you are still being menaced by cats, but at least the brick seems to be doing the trick. You were right about the cats here, they are still out in force, but then so are the wood mice.

I have to admit, I haven’t been out delivering many posters over the last couple of weeks, mainly because the weather has been so bad, but I will be back out there on a mission if and when it improves…